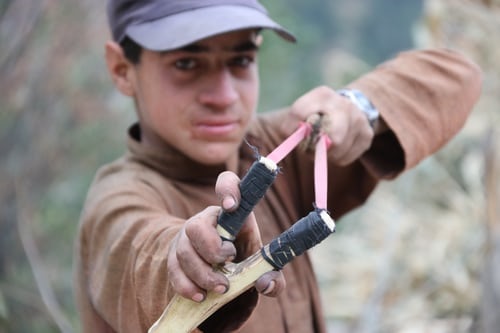 Home » 4 Things You Need to Know About Slingshots

The slingshot is one of the world’s oldest weapons. It has been in use for thousands of years and continues to be used today. They are an excellent weapon when hunting small game such as birds, squirrels, rabbits, etc., but they can also come in handy if you ever need to defend yourself against larger animals.

The following are four things you should know about slingshots and how they work.

1. Know How to Use it Safely

Before you can go out and hunt with your slingshot, it’s good to learn the proper way of using one. That way, you will ensure that no accidents will happen while shooting or hunting small games. You should also be wearing protective equipment such as goggles when learning how to use a slingshot correctly for safety reasons.

Slingshots are not toys. They are powerful weapons that can cause severe injuries if they are used in the wrong way. So make sure you know how to use it properly before hunting or trying out different styles of slingshots.

Make sure that there is no one behind you when shooting or aiming in another direction.

Be aware that the projectile could bounce off of anything and hit you unexpectedly after firing.

Wear protective gloves, boots, and long pants to cover your entire body. It will help protect you against any scratches or bites the small game may inflict on you while hunting them with a slingshot.

Know the different materials used in constructing them. Some models are made out of plastic, while others have metal parts and bands attached to them. It can affect how powerful your slingshots will be when compared to others. For example, a metal for slingshot shooters will shoot projectiles much further than ones made out of plastic due to strength and the band’s ability to transfer energy effectively. So if you want something that can shoot objects at longer distances, then make sure you get a model with quality bands and durable construction material like steel or aluminum.

On the other hand, if you’re looking for something more lightweight and easier to hold while using, plastic models may be a better choice due to their low weight. It also makes them perfect for younger slingshot hunters who are just getting started with learning how to shoot one properly or need a smaller model because of their size.

Metal models are also preferred when hunting larger animals because you can shoot them at longer distances than plastic ones or other materials.

The grip size that is best for your needs depends on your use and preference. Try finding a slingshot with the right grip size, so you don’t have to worry about being uncomfortable when using it for hunting or target practice. Some people prefer a larger one because it’s easier to hold and use without feeling discomfort over time, while others like smaller ones that can be held with just two fingers or fewer. So this comes down to what you’re most comfortable with and what you plan on using your slingshot for before making a decision.

If you want something that can be held easily, then go with smaller ones. If not, make sure the one you buy is large enough to fit two fingers or more inside of it comfortably while shooting objects at targets. That will allow you to shoot and aim appropriately without feeling any discomforts which can lead to an inaccurate shot.

There are many different types of materials used in the construction of bands for slingshots. Some models have flat ones, while others have rounder-shaped ones, so it’s important to know what you’re getting yourself into before buying one.

For example, flat bands tend to be more accurate than rounded styles because they fly in a straighter line rather than curving upwards slightly at the end. In addition, they transfer more force from your arm into objects when shot, resulting in them going further and hitting targets with greater accuracy.

On the other hand, round bands are lighter because of their design, so if you want something easier to hold while hunting down your prey, then go with this style. That will make them easier to carry around because they are lighter due to the lack of material used in creating one. Still, you won’t shoot targets as accurately when using these models compared to their counterparts.

Different sizes can help determine the best one for someone based on their hand size and what they’re looking for when using a slingshot. By that, you’ll be able to shoot more accurately downrange if your band type of choice is flat rather than round.

Dental Care Tips: How To Get The Perfect Smile

How To Choose The Right Lighting For Your House: 6 Tips

How to Find the Perfect Pair of Shoes Online

Valentine Day Gifts 2022: 8 Best Gifts to Impress Your Valentine in Less Than $100