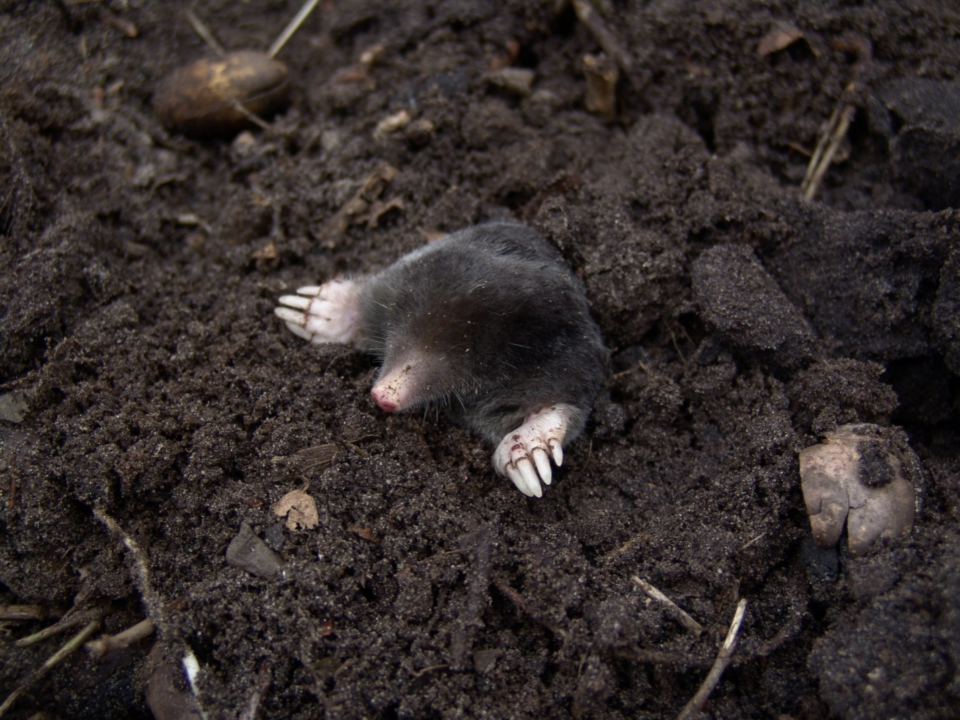 Home » 7 Telltale Signs of a Mole Infestation in Your Yard

Moles often get the blame for destroying bulbs and other underground parts of plants, but in fact, most moles are insectivorous.

That means, they often assist gardeners by snacking on grubs and other harmful soil-dwelling organisms. They also help aerate the soil and generally do more good than harm in a garden.

However, things can quickly get out of hand when you have a mole infestation on your hands. All that digging and tunneling can damage the roots of your lawn and make an unsightly mess of your garden.

Keep reading to find out if it’s time to take action against the moles in your garden.

Moles create tunnels as they forage for food. This results in a lot of misplaced dirt that they push to the surface. Molehills are evidence of this housekeeping routine.

They usually dig in four-hour shifts and can produce a molehill after each of these exertions. They stop digging when they feel vibrations from people and pets walking on the surface near them.

Outside the breeding season, moles are solitary animals and fiercely territorial, so mole infestations are uncommon in small gardens. One way to check is to rake up all the molehills in your garden and observe where new ones spring up.

If you notice these mounds of soil popping up in different areas of your garden, there’s a good chance you have more than one mole.

Gophers also create mounds of earth as they move about your garden, but these usually occur close together and don’t have chunks of soil in them as molehills do.

Unfortunately, moles have no consideration when it comes to your gardening efforts. As they go about tunneling for food, they can expose the roots of your prized plants or uproot them completely.

If you wake in the morning to scenes of mass destruction, with your plants lying willy-nilly all over your carefully prepared beds, you’ve got a mole problem.

The best solution for this is to get in touch with a ground moles removal expert who can relocate these critters to a safer environment where they can fulfill their role in nature without destroying your garden.

Home remedies to deter moles rarely work for getting rid of moles, and can cause unnecessary harm to these creatures.

Despite their subterranean lifestyles, you can sometimes see mole tunnels above the ground. They appear as raised areas running across your lawn like someone’s plowed wiggly designs across your yard.

Since most yard moles’ meals hang around near the surface, it makes sense to see their handiwork appear above ground.

The health of the grass in the area can indicate how old the tunnel is. If it’s already dead or wilted, the mole is long gone. They’ll only hang around until they’ve depleted their food source.

It makes sense to get in touch with a mole removal service to inspect your property for moles before they destroy more of your lawn.

Mole sightings aren’t a common occurrence, but they do sometimes venture above ground.

They are small mammals with potato-shaped bodies that are usually only about seven inches long. They have dark brown fur, small beady eyes, and wide flipper-like feet.

Moles are most active at dawn or dusk during the spring and fall. You might also see them out and about after a rainstorm on a hot, sunny day.

If you regularly see moles in your yard, there’s a good chance you have more than one. It’s unusual for them to move about above the ground, so it’s unlikely you’re seeing the same one every time.

5. An Increase in Weeds

More greenery might not seem a logical match for a mole infestation, but it can indicate problems.

When your lawn isn’t at its best, opportunistic weeds can take over. These hardy pest plants can withstand the disruption caused by moles, and they’ll waste no time sprouting up wherever they can.

If you don’t relocate your moles as soon as possible, you could end up with a long-term weed problem.

Damaged and dying grass can signify that your garden is under attack from moles or harmful grubs that are snacking on the roots of your lawn.

Moles disrupt your lawn’s roots with their burrowing ways and may also inadvertently grab a mouthful of roots while they’re snacking away.

Both these factors will damage your lawn’s root system, which provides it with the sustenance it needs to survive.

7. Your Garden May Be a Mole Paradise

Moles love soft, damp soil that attracts their food species and is also easy to burrow through.

Keeping grubs and other soil-dwelling worms at bay will deter moles from making themselves at home in your garden. Avoid overwatering your lawn, as this makes life easy for them.

It’s also not good for your grass.

As a citizen of Earth, you have a responsibility toward the environment, but you owe it to yourself to keep your garden looking its best.

That’s why it’s always a good idea to enlist a professional pest removal service to assist you, rather than endanger your family and the ecosystem by using poisons and other over-the-counter pest control methods.

Is a mole infestation the least of your gardening or home improvement problems? Browse our website for all the best solutions for your home and garden issues.

How to Know When You Need to Detox: 6 Signs to Watch For

6 Tips For Better Fishing In A Fast River

6 Gardening Tips That You Will Want To Hear

The Complete Guide to Buying a Garden Knife: Everything to Know