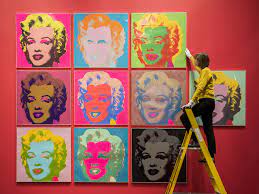 Andy Warhol was an internationally famous artist, known for some incredibly famous paintings and prints such as the iconic Marilyn Monroe portraits and Campbell’s soup tins. To this day, you can find an extensive selection of Warhol’s work in the world-renowned collection of Charles Saatchi.

But before the fame there was a young emerging artist, so we ask, who was Andy Warhol?

Andy Warhol was born Andrew Warhola on 6th August 1928 in Pittsburgh, Pennsylvania to immigrants from Ruthenia, what is now eastern Slovakia.

In 1949, Warhol graduated from the Carnegie Institute of Technology, now Carnegie Mellon University, in Pittsburgh with a degree in pictorial design.

From there, Warhol decided to move to New York City, New York, where he changed his name to Warhol. He was was employed as a commercial illustrator and commercial artist for around a decade.

In the early 1960s, Warhol began to experiment with reproductions based on advertisements, newspaper headlines, and other mass-produced images from American popular culture. The most famous of these prints must be his Campbell’s soup tins, Coca Cola bottles, and wooden replicas of Brillo soap pad boxes.

In 1962, Warhol began his series of portraits, such as those of Marilyn Monroe, Jackie Kennedy, and Elvis Presley. In this same year, Warhol exhibited paintings of his earlier reproduction experiments at the New Realists exhibition in New York.  receiving sudden notoriety. This is largely known as the first important survey of Pop Art.

By 1963, Warhol was mass-producing his reproduction experiment images using a photographic silkscreen printing method. He then used this silkscreen printing to produce endless variations of his celebrity portraits in a variety of bright and clashing colours.

Warhol’s work was perfectly suited to the silkscreen technique, as the lack of emotional involvement in the production of the art mirrored the emptiness of American material culture that he aimed to portray through his work. This rightly placed him at the forefront of the emerging American Pop Art movement.

As the 1960s went on, Warhol began to devote his time to filmmaking, making experimental films. His studio, the Factory, became a meeting point for young artists, actors, musicians, and social curiosities to hang out. One of these, author Valerie Solanas, ultimately shot and seriously wounded Warhol in 1968.

Warhol’s films are typically classed as underground films, known for their inventive eroticism, distinct lack of plot, and running times of up to 25 hours!

By the late 1960s to 1970s, Warhol had become a well-known artist, avant-garde fashionista, and influential celebrity in his own right.

As an established internationally famous artist, Warhol exhibited his work around the world all throughout the 1970s and 1980s, continuing to produce prints that depicted political and Hollywood celebrities, as well as turning his hand back to advertising, illustrations, and other commercial art projects.

On 22nd February 1987, Warhol died unexpectedly whilst in a New York hospital after having a routine gall bladder operation. In his will, her stated that his estate should be used to create a foundation to advance the visual arts. The Andy Warhol Foundation for the Visual Arts was then established in 1987.

And there you have it – everything you need to know about Andy Warhol: Revolutionary artist, photographer, and filmmaker.

What are the costs of moving an apartment?

8 Simple Things You Can Do To Make Your Kids Happy

6 Situations in Which You Should Seek Professional Legal Guidance?