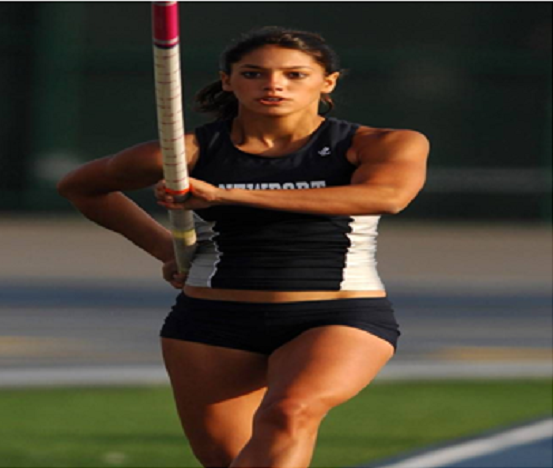 The world is enormous. The enormous globe has millions and billions of people. From those can we find ardent women or men to become something to prove themselves to the world. If yes, then I found a wonderWomen. Her name is Allison Stokke. Before telling about her fame and records in the sports field, there some official details about Allison. let us get jump into it.

Allison’s siblings: David Stokke (who is also an athlete in gymnastics)

These are some quick things to know about Allison stoke.

What Allison Stokke is all about?

Allison Stokke is an American PoleVaulter where she broke many American records in her school pole vaulting. And Allison is an American track and field athlete and more or less Allison spilled her talents in fitness model too.

We are living in a world where struggles and success are being experiencing in a passionate people who are longing to get succeed in some field.

Here Allison also struggled and faced a lot to prove herself to the world. Her passion and the fire on her eyes proved it absolutely correct.

There Allison joined in the California golden bears team.

Here is the logo for the team California golden bears.

It all started here. In her schooling, she used to perform in various sport games where her interest all dragged completely into the sports field. But eventually, this is not transparent reason where she actually wants to get in into the sports but this might be a second reason to become a sports athlete.

WHAT MADE HER TO INSPIRE TO BECOME A POLE VAULTER?

WHERE THE ACTUAL SPIRIT CAME FROM?

Some people get used to inspire the outer world people’s success and winning. But Allison spirit and passion came from her older brother- DAVID STOKKE, whom I mentioned above. He has been training himself from his child and got up his way to win plenty of medal by participating at national level.

There Allison is highly inspired by his older brother. But gymnastics cannot be her category to choose with. Instead, Allison gave a try on pole vaulting.

And there the story starts.

THE OBSTACLES AND SUCCESS WHICH ARE FACED BY ALLISON STOKKE:

Every human has to overcome the obstacles which are occurring in their inner circle members or through social platforms. Social media is a powerful tool where they can uplift a person’s fame in a single night but in other hand they can swipe down the fame too.

That was exactly happened in Allison’s personal life. A picture of Allison had become viral and vulgarity comments in them. There Allison’s hope level is completely down.

But Allison’s family members are very supportive and made to move her past. She also stated that”I worked so hard for pole vaulting and all this other stuff, and it’s almost like that doesn’t matter. Nobody sees that. Nobody really sees me”

This was the saddest thing which happened to her. Allison was very depressed where the world saw her outer appearance and beauty instead her talents and hard work.

But later, she overcame the past and continued to show her proficient skills in pole vaulting and that paved a path to made her win many awards and medals.

What happened in Allison’s life after a certain period in her career:

After a certain period, she started to do pole vault as her profession, when Allison failed to place at U.S in the year 2012. Even in her professional life she got a successful career as a model. Big brands like Nike, athlete and Uniqlo where Allison was appearing in campaigns.

Coming to the end of the chapter, let us pick a line about her personal life.

Allison started to live her life beautifully with her family and her friends. And there the beautiful tale of Allison stokke and pole vault ends.

Tips for Choosing a Siding Color for Your Home

Aging with Grace: A How-to Guide

Excellent Ideas to Create a Side Hustle Online